Raising $2575 in Donations to Support Diversity in Tech

Yesterday I got my HEY invite as part of Jason Fried’s 1984 batch of invites:

I of course went and snagged swyx@hey.com (holla at ya boi!) but then it informed me that my invite code was good for 2 other uses by friends and family!

I hadn’t known the invites were going to work like this, but I’d seen people auctioning HEY invites for $50-$100 bucks. I reckoned my invites would probably be good for at least $10-$100 bucks since its basically just a spot in a waitlist. It’d be interesting to trade in this literal privilege to help out good causes – for me, I’m really interested in helping out POC in Tech and helping people learn to code for free.

So I tweeted out a fun contest: 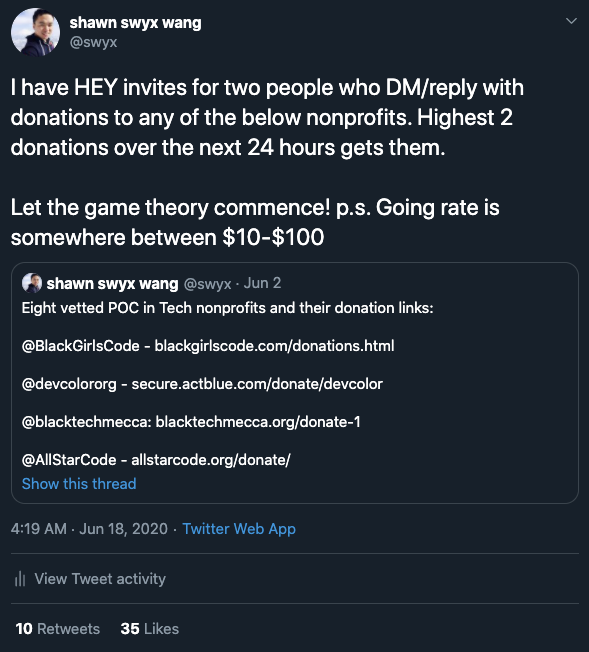 Notice how I set expectations to give them some value and also added a time limit (so that I wouldn’t go mad managing the silent auction).

Within minutes I had 4 bids come in ranging between $50-$100. People were both generous and wanted a HEY invite badly!

Having raised $275 that quickly it was clear that the final winning bid was going to be well above $100. So I wanted to set the next level in terms of expectations. I thought it’d be nice to raise $1984 for charity:

Just saying numbers sometimes speaks them into existence. This is also true for negotiations (a topic I cover in my upcoming book) I went to bed and overnight I got 4 more bids bringing the total to about $1k. This is where I set the next level noting that eBay bids went up to $355.

With an hour to go in the 24 hour period, I did a couple last calls. Emma Bostian had the great idea of offering invites to people of color for free, and two folks jumped in to offer their invites for this great cause! I tweeted them out and it was claimed in minutes. It makes sense, no point raising money for diversity in tech and then ending up with the HEY userbase being full of rich white/Asian guys.

The final hour got pretty nuts. Top bid was $300 by then. I basically had 3 guys who were willing to outbid whatever anyone else bid. You see how this can be awkward with only 2 tickets? Anyway I played auctioneer for a tense hour. One guy went to $325, then I would relay that to the other two. They both countered by going up to $400 independently. I thought that was it, I didn’t really want to go back and forth too many times 😂

Then last minute out of NOWHERE a new guy came in with $500. That would mess me up completely because now I had two guys tied at #2 place for the ticket. The way I resolved it was to relay this info to the person at $325, who immediately responded by pushing it up to $525 so that I now had a clear #1 and #2 bidder. By this time I was well out of time and the bidding period had ended, so that would leave both guys with $400 out of luck. Fortunately, I had one last friend offer their invites. I offered it to them if they threw in a final $100 each. Both accepted! 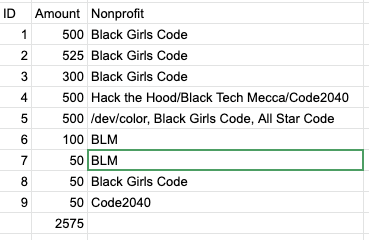 Thank you to (in no particular order) Jordan Gensler, Faraz Ahmad, anonymous, Shane Deconinck and everyone else who chipped in for a good cause!

If you have HEY invites too and would like to do what I did, consider not selling your invites and instead running a competitive donation process for nonprofits you like. Give people a shopping list like you do a wedding registry or Amazon wishlist!